Skip to content
Home » The Best VPNs for Brave Browser 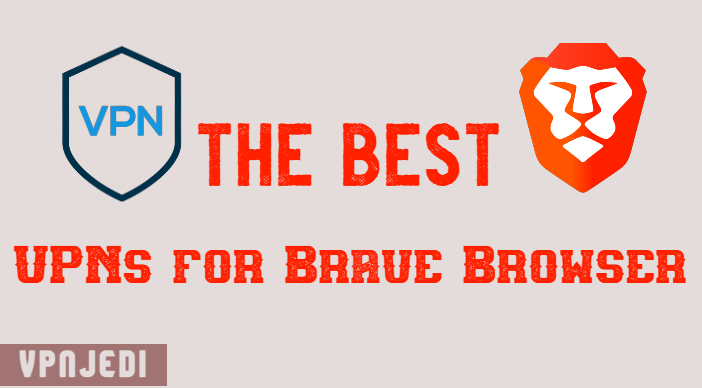 Launched in 2016, Brave browser is a relative newcomer to the market that decided to carve out a niche for itself. It was founded by Brendan Eiche (JavaScript creator and former CEO of Mozilla) and Brian Bondy, the current CTO.

In the short time, it has been around, Brave has made something of a name for itself. It is open-source security and privacy-focused browser based on Google Chrome that is emphatically anti-ads. Brave blocks tracking scripts and other techniques that giant internet companies use to snoop on your online activities, and tailor ads for you.

Brave also provides a performance boost to your browsing experience. According to its internal testing, it can load major news sites up to six times faster than the more mainstream browsers. It is able to achieve this because it cuts out ads and trackers, saving time by downloading less.

The performance boost stretches out farther than just loading pages. It puts less strain on your device’s performance than other browsers like Chrome. Even with several tabs open, Brave uses significantly less memory than Chrome. Up to 66%, in fact.

The 5 Best VPNs for Brave Browser

Brave offers a lot more in terms of privacy than most other browsers. It helps shield users from tracking and ads and offers improved performance.

But using Brave browser alone is not going to guarantee your online protection. Your data can still be stolen, and you can still fall victim to malware. While it offers some measure of privacy, it does not compare to the complete privacy you will receive with a VPN. Additionally, Brave cannot help you bypass geo-blocks and censorship.

To fully enjoy Brave browser, you should combine it with a VPN. This is a list of the best VPNs that you can use with Brave browser.

NordVPN is highly popular, and for good reason. According to most rankings, it is the best overall VPN in the market. It offers exceptional value for its customers, packing a load of security, privacy, and performance features. NordVPN is headquartered in Panama, out of the jurisdiction of the 5/9/14 Eyes Alliance.

There’s a massive network of over 5,600 servers spread out across more than 60 countries. NordVPN’s servers are lightning-quick and reliable, which makes them optimal for streaming and torrenting.

In the same vein, it is great at bypassing geo-blocks, allowing users access to content locked to location. NordVPN can unblock content on Netflix, Hulu, BBC iPlayer, Amazon Prime Video, and a host of other streaming services. Its SmartPlay DNS settings ensure fast speeds and reliable access to streaming on these services.

For security, AES 256-bit encryption protects users’ data, keeping it scrambled. It has support for OpenVPN and several other protocols. Data leaking when there is an interruption in traffic is nothing to worry about, as NordVPN has an automatic kill switch and DNS leak protection. It also guarantees a strict zero-logs policy.

NordVPN’s CyberSec feature brings effective ad-blocking and anti-malware protection. It uses obfuscation to provide access to the internet, even in areas that are heavily censored. For example, NordVPN is able to bypass the Great Firewall of China.

You can try NordVPN out risk-free with its 30-day money-back guarantee.

When it comes to speed, there really isn’t any VPN better. According to the results of very extensive testing, ExpressVPN is the fastest VPN provider around. With more than 3,300 servers in 94 countries, ExpressVPN combines speed with dependable servers to provide a top-notch VPN service.

The fantastic connection speeds you can expect to get when using ExpressVPN makes it a great choice for streamers and torrenters. Even when tested with the OpenVPN protocol, I was able to record speeds that blew most VPNs out of the water. Imagine using the Lightway option instead. On a stable network, you can be sure you will experience zero lags.

ExpressVPN is great for bypassing geographical restrictions to unlock streaming catalogs. It can unblock access to platforms like Netflix, Hulu, BBC iPlayer, Amazon Prime Video, and several others. Its MediaStreamer feature improves your streaming experience, allowing you to stream to devices that don’t natively support VPNs.

Your data is protected by the military-grade AES 256-bit encryption, with support for several protocols. It also comes with DNS leak protection and an automatic kill switch. ExpressVPN operates a strict zero-logs policy, so you can be sure that you are not leaving behind any data trail that may potentially be used to identify you.

ExpressVPN’s TrustedServer technology ensures that its servers only run on RAM, not on hard drives. This guarantees that every time servers are put off, all information on them is completely wiped off. It also keeps the servers running up-to-date software, to reduce the chances of security breaches.

There is helpful 24/7 customer support, for inquiries and complaints. ExpressVPN offers a 30-day money-back guarantee for first-time users.

Surfshark is relatively new but has quickly risen to be one of the most popular premium VPN services in the industry. It’s not all down to the pricing, but Surfshark brings a lot of value to the table with its friendly, affordable plans.

It comes with a network of more than 3,200 servers, and this number is always rising. Surfshark’s servers are present in about 65 countries, and they pack a serious punch.

Its high-speeds mean that you can stream in high-definition without buffering, and it supports P2P connections on all of its servers. It’s great for bypassing geo-blocks too, so you can stream on Netflix, Hulu, Prime Video, etc., from anywhere.

Users are offered top of the line security and privacy features too. Surfshark uses the industry-standard 245-bit encryption to scramble internet traffic. It supports the OpenVPN, IKEv2, Shadowsocks, and WireGuard protocols.

In addition to its attractive pricing, Surfshark is generous, allowing you to connect to an unlimited number of devices simultaneously. You can test it out risk-free for 30 days before committing.

CyberGhost is feature-packed, especially for Windows desktop users. With an interface that is well designed, user-friendly, and intuitive, CyberGhost is a great option for beginners. It offers a one-click configuration, so there’s not much of a learning curve. The Smart Rules panel allows users to automatically connect their preferred serves to chosen apps.

CyberGhost has a huger server network of more than 6,800 servers spanning 90+ countries around the world. Some of these servers are streaming-optimized, so you can unblock access to a lot of streaming services like Netflix, Hulu, BBC iPlayer, Prime Video, and Crunchyroll.

It’s not as fast as a few other VPNs I’ve recommended for Brave browser like NordVPN or ExpressVPN. But you will get decent speeds for streaming and torrenting activities.

Based in Romania, CyberGhost takes privacy and security seriously. It offers bank-level encryption, an automatic kill switch, and leak protection. There’s also zero-logging, so no user logs are stored on its servers.

PIA stands out from the rest of the VPN providers on this list, and indeed any other, in terms of the number of servers it operates. Previously offering 3,000+ servers, that number has rapidly risen to 20,000+, in 73 countries. And it is still rising.

PIA has enough impressive privacy and security credentials to make it one of the best VPNs for Brave browser. It uses the AES 256-bit encryption to make users’ data intelligible to snoopers. There’s a kill switch, and PIA will not store any identifiable logs. Its apps are open-source, so the claims are open to testing. Protocols to choose from include OpenVPN and WireGuard.

In spite of the enormous network of servers it has, Private Internet Access is not the fastest VPN out there. Speeds can be inconsistent, but the wealth of options means that you can try out a lot of servers to get faster ones. For speed-conscious activities like downloading or gaming, you may prefer to use the WireGuard protocol.

In terms of customer support, PIA has 24/7 live chat, ticket, and email support.  It has a 30-day refund policy, to give you time to test out the service.

No, it does not. While Brave browser is more security and privacy-conscious than most other alternatives, it is still only a browser. To guarantee protection for your device and the privacy of your data, you should use a VPN alongside Brave.

And that is why I made this list of the best VPNs to use alongside Brave browser. If you want to be covered on all sides, you should try out one of them. My recommended VPN is NordVPN.

You may, but I would not recommend it. Free VPNs are businesses just like any other and have to make money somehow. Since you don’t pay them directly, they often make you pay indirectly. Free VPNs usually sell user data to the highest bidders, and so push ads to you. That is directly opposed to your reason for using Brave in the first place.