Skip to content
Home » How to Unblock WhatsApp, FaceTime, and Skype in Qatar 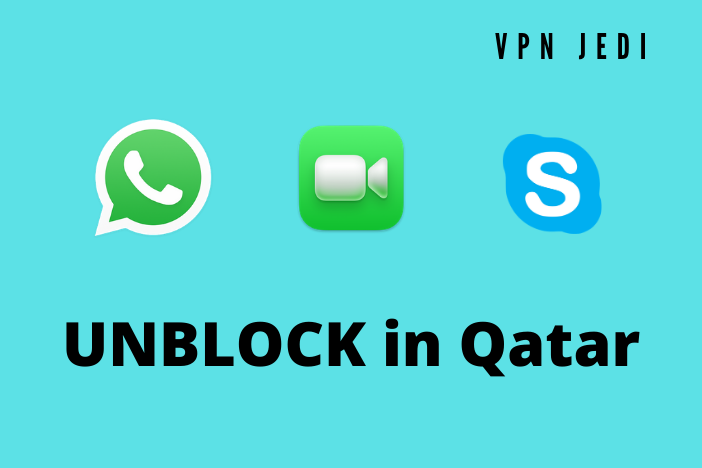 The Government of Qatar has never officially acknowledged banning WhatsApp, FaceTime, Skype, and other VoIP services. But residents in Qatar know that these VoIP services are blocked and are no longer accessible over a local ISP. Do you need to unblock any of these services? Then read on.

If you live in Qatar or you plan to go there on a business or a visit, then you should keep in mind that you will not be able to use any of those services. That includes services like Viber, Duo, and other VoIP services.

Qatar is home to a large number of expatriate workers. This means that the restriction of these VoIP services presents a significant nuisance for a significant portion of the population. Luckily, with a subscription to a VPN service, this problem can easily be solved.

Table of Contents show
Why Do You Need a VPN in Qatar?
The Best VPNs to unblock WhatsApp, FaceTime, and Skype in Qatar
FAQs
Conclusion

Why Do You Need a VPN in Qatar?

Since VoIP calls and services stopped working in Qatar, there have been countless speculations and rumors as to the reason behind the restrictions. These speculations are especially rife as the Government has not given its official position in the matter.

Ooredoo, the primary ISP has made it clear that the issue is not from their end. Furthermore, there are no laws in Qatar that explicitly require that VoIP technology be prohibited or restricted.

There appears to be a law that makes it illegal for a company to provide telecom services for fees without a license. This license must be issued by the ictQATAR.

If this law is taken to be the overriding factor, then it means that only two companies are licensed to provide VoIP services in Qatar. Those companies are Qatar Telecom and Vodacom Qatar.

One school of thought insist that the restriction of WhatsApp, FaceTime, and Skype is an attempt by one of these entities – Qtel – to corner the very lucrative long-distance call market.

This school of thought speculates that these foreign companies are needed out of the way. That way, the only readily available alternative would supposedly be international phone calls. Which, of course, are more expensive, and so, more lucrative.

The Best VPNs to unblock WhatsApp, FaceTime, and Skype in Qatar

Widely regarded as the best VPN service that is available in the industry, NordVPN is bang-for-buck. It is capable of breezing past the VoIP block that exists in Qatar.

It combines a wide network of over 5,500 across about 60 countries with advanced security and privacy features. On NordVPN, your data is protected with military-grade encryption. You also get features like a kill switch and leak protection to ensure that your VoIP calls are entirely private and safe.

NordVPN’s servers are extremely fast and excellent for streaming. It unblocks a variety of streaming platforms, including Netflix, Hulu, HBO GO, Amazon Prime Video, BBC iPlayer, and SlingTV. It has torrenting-optimized servers for downloading and P2P sharing.

When it comes to picking a VPN, speed of connection is one of the major factors to look out for. And when it comes to speed, then you can really do no better than ExpressVPN.

Its network of over 3000 ultra-speed servers means that your Skype, FaceTime, and WhatsApp VoIP calls can be made and received with no frustrating lags.

ExpressVPN is also great for unblocking streaming services. With this VPN, you can access the content on Netflix, HBO, Hulu, BBC iPlayer, Shudder, DAZN, Disney+, and a host of other streaming platforms. All of ExpressVPN’s servers are suitable for torrenting.

It does not just excel at speed. ExpressVPN comes with a powerful array of privacy and security features. It uses the advanced AES 256-bit encryption, together with several protocols.

ExpressVPN also has a kill switch, so that sensitive data does not get leaked in the case of a disconnection. Additionally, it enforces a strict no-logs policy.

ExpressVPN works on Windows, macOS, Android, iOS, browsers, and routers. It has a 30-day money-back guarantee on offer to new users.

CyberGhost is a very highly rated VPN provider with a network of over 6000 servers in over 60 countries. Its servers are high-speed and reliable and Qatari users will find they will very easily handle connecting to WhatsApp, FaceTime, and Skype. Its servers also support P2P sharing, with dedicated torrenting profiles.

It has a simple and user-friendly app that is suitable for beginners to VPNs. Additionally, it has very responsive and around-the-clock customer support.

Streaming platforms such as Netflix, ESPN, Comedy Central, BBC iPlayer, and Sky GO can be unblocked and accessed with CyberGhost. It is compatible with Windows and macOS on desktop, Android, and iOS on mobile, Amazon Fire Stick, Chrome, Linux, and routers.

New users on mobile can take advantage of a 7-day trial offer. For Windows users, on the other hand, there is a 24-hour free trial. CyberGhost offers an industry-leading 45-day money-back guarantee so new users can test it out risk-free.

PrivateVPN offers a small network of servers – about 150+. Still, it is highly rated, and you can use it to unblock VoIP services in Qatar at high speeds and over a stable and reliable connection.

Its servers are optimized for streaming. With PrivateVPN, you can unblock content on Netflix, Hulu, Amazon Prime Video, HBO, and BBC iPlayer. All of its servers also support P2P sharing so this is a great option for you if you are a torrenter.

This VPN does not compromise when it comes to security. It packs 2048-bit encryption which will keep your internet traffic away from prying eyes, DNS/IP leak protection, and the OpenVPN protocol.

PrivateVPN is compatible with Windows, macOS, Android and iOS. You can test it out by taking advantage of a 7-day free trial and a 30-day money-back guarantee.

PIA slots in last on my list of VPNs for accessing VoIP services in Qatar. It is a great option to access Skype, FaceTime and WhatsApp in Qatar, with its massive network of 17,000+ servers across more than 70 countries. Its servers are ideal for torrenting as well.

PIA can unlock and access libraries on platforms like Netflix, Amazon Prime Video, and Disney+. It is compatible with Windows, macOS, iOS, android, Linux, browsers, and routers.

If you want to try Private Internet Access out to see its features for yourself, you would be backed by a 30-day money-back policy.

Is it Legal to Use a VPN in Qatar?

There is no law or regulation in Qatar that makes installing and using a VPN service illegal. Using a VPN, therefore, is perfectly legal. Of course, this fully hinges on you not committing any crimes while using one.

Is it Legal to Use VoIP services such as WhatsApp, FaceTime, and Skype in Qatar?

The Government in Qatar has never publicly stated that using any of these services is illegal. In fact, it has largely ignored all calls to be clear on the matter. There have been no laws created to make illegal the use of them.

As long as a company offering VoIP services has a license, then residents in Qatar are not committing a crime if they make use of a VPN to access these services. Skype, WhatsApp, and FaceTime services are therefore perfectly legal for Qataris.

With a large number of foreign workers and expatriates, the blocking of VoIP call services as WhatsApp, Skype, and FaceTime is very inconvenient. Thankfully, the availability of VPNs means it does not have to stay permanently so.

Downloading and subscribing to any of the VPNs on this list will have you able to connect to friends, family, and business contacts on your preferred VoIP service.