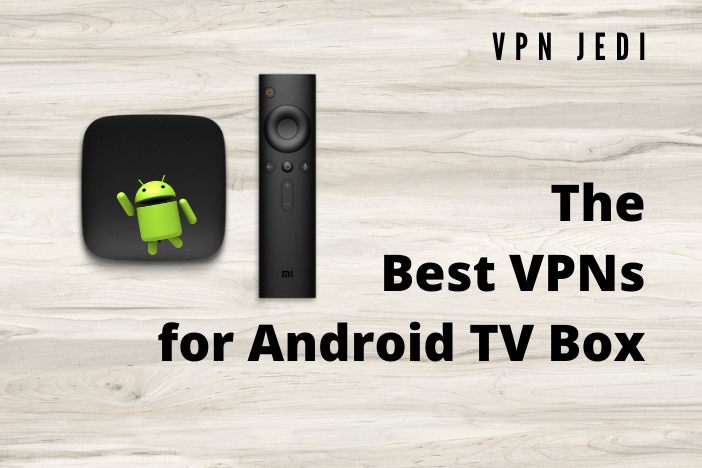 The Android TV box is a small media device that is connected to a TV and used to watch TV shows, movies, and play games.

It makes for a wide range of uses, like accessing and browsing the internet and streaming videos on your TV from such platforms as Netflix, Amazon Prime Video Hulu, etc. The Android TV box effectively turns your regular TV into a Smart TV.

A downside to using an Android TV box to stream content is geo-blocking. Streaming services restrict content to regions because of copyright license agreements with studios and producers.

They use geo-block technology to prevent people who are outside the countries accepted in the agreements from accessing them.

To stream your favorite TV shows and movies from outside your region with an Android TV Box, you will need a VPN to be installed on it. With a VPN, you can connect to a server in the country you want to stream from, using an IP address provided by that server.

This helps you bypass the geo-block and tricks streaming platform into thinking that you are from that country.

This VPN has a huge network of servers that are conveniently spread across the world. It boasts over 5,500 servers across more than 60 different countries. Most of those servers located in the countries you are likely to stream from.

It is very adept at bypassing geo-block technology employed by streaming services. With NordVPN, you can get access to such platforms as Netflix, Hulu, Amazon Video Prime, Shudder, Crunchyroll, BBC iPlayer, and HBO.

It also offers incredibly fast speeds, and so you don’t have to worry about buffering and lags as you stream. In addition, you get unlimited bandwidth. This means that you can go on those streaming marathons, enjoying your favorite TV shows without having to bother about your connection speed getting throttled.

You are allowed up to six simultaneous connections on your devices from one subscription on NordVPN. Apart from Android TV Box, it is also compatible with Windows, macOS, Android, iOS, Linux, browsers, and routers.

To try out NordVPN on your Android TV Box totally risk-free, you are offered a 30-day money-back guarantee.

ExpressVPN is another great option for you to stream content through your Android TV Box. It comes with a clean, intuitive user interface, and the app is easy to configure and use, even by beginners.

You can connect your Android TV box to any of its over 3000 servers, located in more than 90 different countries. The connection speeds that ExpressVPN offers its users are second to none.

In addition, it has servers that are optimized for streaming. As a result, it is very effective at beating geo-blocks that streaming platforms set up. With ExpressVPN, you can unblock and access platforms like Netflix, BBC iPlayer, Hulu, Amazon Prime Video, Disney+, and many more.

With ExpressVPN, you can bypass these restrictions by changing your region on your Android TV box. It comes with a great feature – MediaStreamer – which allows people who own the few brands of Android TV devices that do not support ExpressVPN to stream and view restricted content on their TVs.

You can use ExpressVPN on your Windows, macOS, Android, iOS, browsers, and routers. It allows you to connect up to 5 devices to one account at the same time. If you decide to subscribe, you are backed by a 30-day money-back guarantee.

CyberGhost’s network of servers is vast, with more than 7000 servers spread out across 90+ countries. The huge connection of servers is great for your Android TV box, as you are able to connect to servers in many different countries to access streaming and gaming.

A great feature that will come in handy for you is the Best Locations feature. When you choose this mode, you are immediately connected to the server in the location that you prefer. This server will provide the best speed and performance.

It can unblock access to streaming platforms like Netflix, BBC iPlayer, Amazon Prime Video, ESPN, Disney+, and a host of others. The streaming is without lag and buffering too, as it provides fast speeds. There are also no data limits, so you’ll not get rudely throttled in the middle of a Supernatural binge.

CyberGhost is also compatible with Windows, macOS, Android, iOS, browsers, and routers. Its clients are well designed and intuitive and are great for newbies.

Up to seven devices or connections are allowed simultaneously on one CyberGhost subscription. When you subscribe, you are eligible for a 45-day refund guarantee, which is more than you can get from most others.

Surfshark is another great option for a VPN to use with your Android TV Box. It has a network of more than 1700 servers across 63 countries.

It comes with a great NoBorders feature, which is very convenient for your Android TV box as it can bypass some of the toughest geo-blocks. With this feature, you can access catalogs and content in several countries like the US, UK, and even China.

Another handy feature is its Whitelist, which is basically a split tunneler. It allows you to stream content or play games under the secure tunnel of the VPN while carrying out other tasks of your choice directly on your regular traffic. This feature tends to make your connection speeds even faster.

You don’t have to worry about annoying and intrusive ads either. There is a native ad blocker feature, CleanWeb, which clears up any and all ads. It also automatically stops malware.

Surfshark is compatible with Windows, macOS, Linux, Android, iOS, Amazon Fire TV Stick, and routers. It very generously offers you unlimited simultaneous connection on all of your devices. There is a 30-day money-back guarantee if you decide to test it out risk-free.

PrivateVPN runs a relatively modest network of servers, about 150+ in about 60 countries, but don’t let that fool you. In spite of its small number of servers, it does not compromise on performance. You’ll get high and stable connection speeds and access to locked content in other regions.

It is able to do this by regularly updating the IP addresses on its servers so that streaming content providers cannot keep up. With PrivateVPN, you can unblock access to Netflix, HBO Now, Showtime, BBC iPlayer, Hulu, Amazon Prime Video, ABC, Sky TV, and others. It offers dedicated streaming servers so you can get high speeds and reliable connections.

PrivateVPN is compatible with Windows, macOS, Linux, Android, and iOS apart from Android TV Box. The apps that it comes with on these platforms are simple to set up and use, and should not present a problem, even if you are a newbie. You are allowed up to 6 simultaneous connections on your devices.

To try it out completely risk-free, you are offered a 7-day free trial. If you decide to subscribe, you get a 30-day money-back guarantee.

IPVanish is a VPN service with a network of more than 1,200 servers across 75 different countries. It is compatible with most Android TV Boxes and is generally reliable in terms of speed and connection stability.

With IPVanish, you can unblock geo-blocks on a number of streaming platforms including Netflix, Sling TV, HBO Now, FOX, DAZN, ESPN+, and others. You can also unblock access to apps from other regions son the Google Play Store.

Unfortunately, if you are a subscriber to BBC iPlayer and some other services, then IPVanish may not be the ideal choice for your Android TV box. I was unable to access blocked libraries in that service when I tried. In spite of that, for those services it does unblock, you are guaranteed high speeds and buffer-free streaming.

IPVanish is generous with the number of simultaneous connections you are allowed, as you can connect up to 10 different devices at the same time. On the other hand, it is less than generous with the money-back guarantee offered. You can only get a refund if you wish to within 7 days.

It is compatible with Windows, macOS, Android, iOS, Linux and Chromebook.

With a network of over 700 servers spread across 70 countries, VyprVPN is great for bypassing geo-blocks due to features like its Chameleon protocol. This protocol works by scrambling your metadata so you can remain undetected to the technology used by these services.

It also offers fast connection speeds and reliable connections. So you can stream, browse and play games on your Android TV Box without lags and buffering. With VyprVPN, you can unblock geo-restricted libraries on Netflix, BBC iPlayer, YouTube TV, Amazon Prime Video, ITV Hub, and others.

Another feature that can come in handy for your Android TV Box is dynamic server switching. This automatically connects you to another server in that location when the one you are making use of collapses or becomes overcrowded. You can also customize your VPN connections and monitor your connection speeds.

VyperVPN allows you up to 5 connections on your devices at the same time. It is compatible with Windows, macOS, Linux, Android, iOS, and browsers. You can try it out, taking advantage of a 30-day money-back guarantee.

Hotspot Shield, with its network of over 3,200 servers spanning over 80 countries, is great for streaming at fast speeds. It lets you enjoy blocked streaming services on platforms such as Netflix, Amazon Prime Video, BBC iPlayer, YouTube, and Hulu.

It is a great choice for streaming, gaming, and browsing on Android TV Box as it is compatible with a wide range of devices. Hotspot Shield’s servers are fast enough that your connections are buffering and lag-free.

Additionally, you get unlimited bandwidth and so you don’t have to worry about your connection speeds getting throttled.

It is compatible with Windows, macOS, Android, iOS, and Chrome browsers. Its clients on those platforms are user-friendly and intuitive. You are allowed to connect up to 5 devices simultaneously on one Hotspot Shield subscription.

You can try it out, backed by a generous 45-day money back guarantee.

How can I change my location on the Android TV Box?

Is it legal to use a VPN on the Android TV Box?

In most countries in the world, using a VPN for whatever reason is completely legal. And that includes installing and using it on your Android TV Box. Some other countries restrict internet freedom, and in those countries, making use of a VPN is not always legal for most citizens. These countries include China, Iran, Iraq, Uganda, Oman, and Russia.

Does a VPN slow the Android TV Box’s streaming speeds?

A VPN hides you from detection by providing a secure and private tunnel and routing your traffic through that tunnel. This process will naturally result in your connection losing some speed. On the other hand, a VPN can actually increase the speed you are assigned by your ISP as it can keep you from getting throttled.

The Android TV box is an excellent entertainment device, but it does have its limits. Without a VPN, you would be hamstrung by geo-blocking, and restricted to content that are only available in your region.

A VPN makes sure than you can bypass these geo-blocks and access libraries on various streaming services.

Not all VPNs are on the same level, though. And that is why I made this list of the VPNs I recommend to use alongside your Android TV box. They are fast, great for streaming, and will help you bypass those annoying restrictions,