Skip to content
Home » The Best FREE VPNs for Chromebook 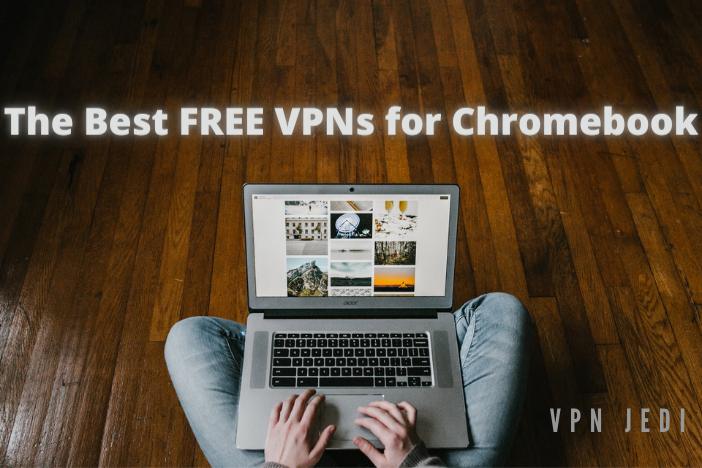 If you use Google’s Chromebook laptop, and looking for free VPN options to make surfing the internet, streaming, and torrenting private and even safer, then this is just the article for you.

While Google has pulled the stops into making the Chromebook much more secure than its Windows, Android, and macOS counterparts, it is still not a hundred percent secure. Chromebooks can, and sometimes do get infected. They cannot be hacked and do not run .exe programs, so they cannot be attacked by most malware.

In spite of that, Chromebooks are not entirely immune to phishing attacks, data breaches, trackers, and data thefts from cybercriminals. And that is why you need a VPN on your laptop.

A VPN ensures that you can carry out your tasks without having to worry about the safety of your sensitive information. Additionally, you will be able to bypass geo-blocks to stream videos and go around internet censorship restrictions under the private tunnel it offers.

The 8 Best Free VPNs for Chromebook

Starting off this countdown is Windscribe because, for a free VPN, you’ll be getting very good value for nothing. As expected, you don’t get unlimited bandwidth, but the 10GB offered is actually quite generous. It is not enough to binge-watch Grey’s Anatomy with, but with reasonable use on tasks that are not data-intensive, it could last you the month.

Windscribe has a network of close to 200 servers across 110 locations in 63 countries. Its servers provide decent connection speeds, and you will generally find them reliable. Some of its servers support torrenting and P2P activity.

On the free version, you only get access to 10 of those servers located in the United States, Canada, the United Kingdom, Hong Kong, Germany, France, the Netherlands, Switzerland, Norway, and Romania.

To access all the other servers, you would need to upgrade to one of the very budget-friendly premium plans. On the premium plan, you can unblock geo-restrictions on streaming platforms such as Netflix US and YouTube.

Your security and privacy are shielded by a bank-level AES 256-bit encryption, port forwarding, an automatic kill switch, and DNS/IPv6 leak protection.

You don’t have to worry about leaving any activity trails either, as none of your connection logs are stored on Windscribe’s servers. Info such as usernames and total connection data transferred are saved but automatically deleted in minutes.

Hotspot Shield is one of the most popular free VPN providers. It gives you options between free and premium versions, with the free version limited in terms of features. For one, you get a data cap of 500MB a day which adds up to about 15MB a month.

At face value, that is 50% more than Windscribe’s offering but can become frustrating if you need to use more than 500MB in a single day. Still, it is significantly more generous than most other free VPNs out there. Plus, Hotspot Shield compresses data while you stream, so you can squeeze more out of the limited bandwidth.

It has servers in more than 80 countries, but you will need to upgrade to take advantage of that offering. Free users are only allowed a single server, which is located in the US. If you upgrade, you would be able to unblock access to platforms like Netflix, Hulu, Amazon Prime Video, and BBC iPlayer.

There is a 7-day free trial so you can try out the premium features. There’s also a generous 45-day money-back guarantee if you decide to subscribe to the Elite version.

NordVPN is immensely popular, and for good reason too. It is easily one of the best VPNs you can hop on. Now I know what you are thinking – NordVPN only offers a paid service. But it’s here anyway because it is very affordable compared to the value you will receive in return. Plus, you are offered a 30-day money-back guarantee, which means you get to try it out risk-free for a month.

NordVPN has a great app that is intuitive and easy to use. There is not a lot of tinkering and configuration to be done and there are dedicated profiles to help you out.

It comes with a huge network of upwards of 5,300 servers spread out across more than 60 countries. Their servers are super fast and reliable, and there are servers optimized for streaming and torrenting.

With NordVPN, you can bypass most of the toughest geo-blocks and stream your favorite movies and TV shows on streaming platforms such as Netflix, Hulu, HBO, Amazon Prime Video, Disney+, BBC iPlayer, and many more.

When it comes to security, you won’t find any more powerful. NordVPN ensures that your data is safe and private with its AES 256-bit encryption. It comes with a variety of protocols, including OpenVPN. It has an automatic kill switch, so you are sure your data doesn’t get exposed in a traffic downtime. There’s also DNS/IPv6 leak protection, and it has a strict no-logs policy.

Apart from Chrome OS, NordVPN also has apps for Windows, macOS, Android, iOS, Linux, and Firefox and it is compatible with a lot of Wi-Fi routers. Users are allowed up to 6 simultaneous connections on a single device.

The first thing that strikes you about TunnelBear is its interface. It forgoes the dull and regular design that is all so common with most VPNs. Instead, it opts for an undeniably charming and delightful user interface. It is not just easy on the eyes either. TunnelBear is very simple to use and intuitive.

Free users are restricted to 500MB of data a month. This is not really enough for a lot of tasks, but you can earn more bandwidth for yourself by tweeting about the service.

Basically, it is an option for situations you may need more extra privacy and security than your Chromebook offers. But it is not the ideal option for streaming and torrenting. Then again, free VPNs rarely are.

Your internet activities are masked by the AES 256-bit encryption it offers. It also has a kill switch, called the Vigilant Mode which immediately and automatically kills your connection when there is an interruption in traffic to keep your data unexposed.

Additionally, you are able to bypass government internet censorship with the help of its Ghostbear feature.

Hide.me is more generous than TunnelBear in terms of bandwidth as you are offered up to 2GB of data for a month. That’s not enough data to go on streaming and download sprees, but it may be enough for emergencies.

Free users are limited to 5 servers which are based in the United States and Canada. If you purchase a premium plan, you get access to all 1800+ servers in over 50 countries. It won’t throttle your connection speeds if you stay on the free plan, and that’s something to put into consideration.

Hide.me manages and controls its entire network of servers. This is definitely a plus as far as privacy and security are concerned. In addition, you get the AES 256-bit encryption, an automatic kill switch, and IP leak protection. Your user logs do not get stored on its servers, thanks to a strict no-logs policy.

It is compatible with all the major platforms, with apps for Windows, Mac, Android, and iOS. There are also browser extensions for Chrome and Firefox.

The Opera VPN is not quite like the other VPNs on this list. For one, it is not a standalone VPN and works exclusively on the Opera browser.

This means it is more of a proxy than an actual VPN. Additionally, it places no limits on the bandwidth you are allowed to use, which is pretty generous considering it is free.

One great feature of the Opera VPN is that it works with Netflix. This is very impressive considering there are tons of premium VPNs that cannot unblock access to Netflix.

It is important to note that the process involved is not quite as straightforward as in regular VPNs. It is also able to access Hulu, YouTube, Spotify, and Pandora.

While its connection speeds are not the fastest out there, they don’t fall below average. You will be able to stream Netflix and other platforms in HD quality. Additionally, Opera VPN does not throttle your speed, and that’s one less thing to worry about.

When it comes to security and privacy, Opera VPN protects your data with industry-standard 256-bit encryption. It does not log any user data that can be traced back to you. It also offers Wi-Fi protection.

The final free VPN on our list is not a standalone VPN, but a Chrome extension. It has servers in more than 30 countries around the world, including the United States, France, and Australia.

Like Opera VPN, you don’t need to be concerned about data caps and throttling. One of the key benefits of choosing uVPN is that users are allowed unlimited bandwidth to browse and stream with. It works well with YouTube.

uVPN secures your traffic with the AES 256-bit encryption. No user logs are stored either, so you don’t leave behind any identifying data trails. Additionally, there is a webRTC leak protection feature to protect users from DDoS attacks.

Are free VPNs safe to use?

While you are not required to pay for them, free VPNs are rarely completely free. You run the risk of having your data stored and sold to the highest bidders. In addition, they are limited in terms of features when compared to premium VPNs.

Discovering free VPNs that you can put a measure of trust in for your Chromebook is not an easy task. But we did that for you.

Is it even legal to use a VPN in the first place?

In most countries in the world, using a VPN is perfectly legal. A few countries though have strict bans or some sort of restriction on VPN in accordance with their internet censorship laws. These countries include China, Russia, Turkey, Iraq, and the UAE.

The Chromebook is one of the most secure platforms available. But that does not mean that it is impervious to cyberattacks. Additionally, you may need to decide to use your Chromebook for tasks like streaming or simply browsing certain websites in certain countries.