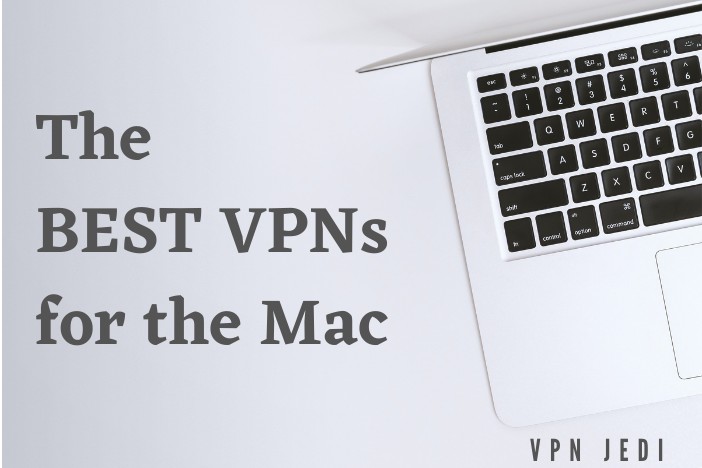 It is not the easiest of tasks to find good, safe, reliable, and speedy VPNs for the Mac, considering there are so many mediocre and downright dangerous options out there.

The macOS already provides a powerful security system with lots of features. But a VPN application offers users more than just basic security and protection. It comes with a ton of other features.

Even if you are confident in your Mac’s ability to keep away malware, a VPN will offer you much-needed anonymity on the internet. In addition, you also get to bypass geo-blocks and censorships and avoid speed throttling by your ISP.

Why You Need a VPN on Your Mac

Granted, the macOS already comes packed with security features, but it is by no means foolproof. For example, your internet activities can still be tracked by your ISP, Government agencies, and internet hackers.

And that is where a VPN comes in. With a quality VPN, Mac users no longer have to worry about leaving internet trails behind that can be detected by any interested party. A VPN protects its users with end-to-end encryption, making them invisible to outsiders and keeping them anonymous.

Users can also use a VPN to access streaming services such as Netflix and Hulu that may otherwise have been restricted. When a user connects to a VPN, another IP address is assigned to their device. Websites or platforms are thus tricked into accepting that they are connecting from an accepted region.

A VPN can also help users who are interested in torrenting. It keeps them secure when downloading or sharing files, encrypting their internet traffic, and providing faster download and connection speeds.

The 9 Best VPNs for the Mac

I’ve carried out very extensive testing on several VPNs that are available for the Mac. These tests were based on certain metrics:

My top pick for the best VPNs for your Mac is NordVPN. It is for all intents and purposes the best overall option in the market. NordVPN is budget-friendly, simple, and intuitive, and it is very secure. It also has the ability to bypass the toughest geo-restrictions.

NordVPN has a wide network of over 5,500 high-speed servers in about 60 countries with servers optimized for P2P connections. Streaming on popular streaming platforms like Netflix, Disney, Hulu, HBO, and Amazon Prime was a breeze during testing. Its SmartPlay feature is optimized for streaming on Mac.

I also discovered that for the purpose of accessing the internet in such restrictive countries as China, the OpenVPN client was the better protocol choice.

Both NordVPN clients come with the AES 256-bit encryption for your data protection. You also get DNS and IPv6 protection, an automatic kill switch, and a strict zero-logging policy. On the OpenVPN client, users can make use of the DoubleVPN feature for an additional layer of security.

DoubleVPN routes your internet traffic through two different servers. This feature may be unnecessary for regular internet usage, as it slows down your browsing speed significantly.

NordVPN offers advanced obfuscation settings which let you bypass internet censorship. It does this by masking your traffic to like regular internet traffic via your local ISP. This feature is powerful enough to bypass censorship restrictions in countries such as China and Russia.

ExpressVPN has a network of over 3000 super-fast servers across 94 countries in the world. It prides itself on its blazing-fast speeds and my tests proved this to be the case. I experienced no drop-offs in speed browsing, streaming in high definition, and even gaming.

In terms of security, ExpressVPN comes with 256-bit encryption to protect your traffic. Its macOS app uses the OpenVPN protocol. Additionally, it offers users an automatic kill switch (the Network Lock feature), DNS and IP leak protection, and a strict no-logs policy.

A unique feature of ExpressVPN is the ability to use the VPN on devices such as Smart TVs and game consoles that do not ordinarily support VPNs. So users can set up their Macs to share their ExpressVPN connections over Wi-Fi.

Subscribers are allowed 5 simultaneous connections to different devices on a single account. There is a split tunneling feature that allows you to use certain apps through the VPN network and others on your regular ISP network.

CyberGhost has one of the widest coverages I’ve seen. It offers users over 6,600 servers across more than 90 countries in the world to choose from.

Its high-speed servers are optimized for online streaming and P2P connections. I was able to stream on Netflix and Disney+ in 4K and high definition, experiencing no lags in streaming.

CyberGhost has a user-friendly macOS app with features that flattens the learning curve for VPN beginners, such as quick setup and optimized servers for different platforms.

When it comes to security, CyberGhost comes with military-grade 256-bit encryption, an automatic kill switch, and DNS/IPv6 leak protection. It also has a strict no-logs policy. The app uses the IKEv2 protocol, but there is an option to configure OpenVPN for users who prefer that.

CyberGhost provides an in-built ad blocker, tracker blocker, and protection against malicious websites, keeping your Mac safe from websites that may try to compromise its security.

Another feature to watch out for is Smart Rules. Smart Rules lets you pick the apps you prefer to launch automatically after a VPN connection has been established.

CyberGhost users are limited to 7 simultaneous connections on a single account, which should be enough to connect your other devices. There is a generous 45-day money-back guarantee.

SurfShark is a VPN service with over 3,200 sure-fast servers across more than 60 countries. It is one of only very few VPN services which offer unlimited simultaneous connections, allowing users to connect all of their devices on a single account.

Its servers are ideal for streaming and they support P2P connections so they can be used for torrenting. I was able to use Surfshark to bypass geo-blocks on Netflix, Hotstar, Amazon Prime, and HBO in high definition. The streaming was clear, and I experienced no buffering.

SurfShark comes with an AES 256-bit encryption, with options for using either IKEv2 or OpenVPN protocols on your Mac. It offers an automatic kill switch feature. Also, it offers private DNS on all of its servers so that it handles all DNS request itself. This is a rarely seen feature on VPNs and what it does is reduce the risk of leaks.

PIA has a huge network of over 16,000 servers that support P2P connections and port forwarding, making it an ideal choice for users who are into torrenting. Its servers are lightning fast with the Quick Connect feature offering even better performance, especially during peak periods.

PIA comes with 256-bit encryption to protect your data. It has a variety of protocols to choose from like OpenVPN, WireGuard, and SOCKS5 proxy. This makes it easier to bypass geo-block restrictions in countries such as China and the UAE.

DNS/IPv6 leak protection makes sure that your sensitive information does not get leaked. PIA has a strict zero-log policy, so you don’t leave any trails that could be detected behind. There is a kill switch feature to block your traffic in cases of interruptions to your browsing or streaming.

Subscribers to Private Internet Access are allowed 10 simultaneous connections on an account. There is a 30-day money-back guarantee for new users.

PrivateVPN has a small network of just about 150 servers, but it nonetheless fast and secure. When tested for speed, I enjoyed blazing-fast service streaming on platforms such as Netflix, HBO GO, and Hulu. I was even able to enjoy gaming with no lagging.

It is worth nothing that the small network of servers means that there will be some overloading during peak connection times.

PrivateVPN uses the AES 256-bit encryption technology to scramble your data. It supports the OpenVPN protocol and has DNS/IPv6 leak protection. There is also has a strict zero-logs policy and has a Stealth Mode feature which I found worked incredibly well for bypassing tough VPN geo-blocks. It now comes with a switch on its macOS app.

PrivateVPN has a 30-day money-back guarantee for new users.

VyprVPN has a connection of 700+ servers across 65 countries. It is not as fast as some of the top VPNs like NordVPN or ExpressVPN, but you will get decent speeds. I was able to use it to access blocked libraries on Netflix, HBO GO, Disney+, BBC iPlayer, etc.

Its Chameleon technology is available on the macOS app, making use of a very secure AES 256-bit encryption. It has a kill switch and a strict zero-logs policy, ensuring that you don’t leave any data trails behind for potential scrutiny.

VyprVPN proved very effective for bypassing geo-restrictions by hiding your VPN traffic. It was able to evade the Great Firewall of China consistently during testing through its Chameleon protocol. There is an OpenVPN option but I found the Chameleon technology to offer better speeds on the Mac.

IPVanish users have an array of 1300+ servers across 70+ countries to choose from, with the macOS app letting them see the ping and load percentages on each of the servers.

These ping percentages are especially crucial for gamers as the percentage can affect the performance of your gaming. It also has strong P2P support, with all of its servers allowing torrenting.

I found the speed to be steady most of the time during testing, although there was some lag when I tried streaming on Netflix at peak times. I was able to unblock HBO but no ITV Player or Hulu.

IPVanish’s security is top-notch, with the app offering 256-bit encryption to protect your data. You get the OpenVPN protocol for guaranteed security and speed. Other alternatives to OpenVPN are IPSec or IKEv2 for even better speeds, albeit with less security. It also comes with SOCKS5 proxies.

There is a scrambling option available so that you can shield your traffic but this considerably slows down your speed. This scrambling technology was not powerful enough to avoid detection in China.

IPVanish users are allowed unlimited simultaneous connections on all their devices. There is a 30-day money-back guarantee for new users.

Zenmate has a network of over 3000 servers spanning 73 countries with most of the servers coming with P2P support. I found the servers to have largely steady speeds when tested, especially during off-peak periods.

There were significant losses during peak periods, resulting in lags and buffering when streaming on Netflix. I found it effective at unblocking access restrictions to such services as Netflix, Hulu, and BBC iPlayer.

In terms of security, it comes with AES 25-bit encryption and an automatic kill switch feature. There is also a strict zero-log policy so no user information is stored in its servers. It also offers the OpenVPN protocol for macOS.

ZenMate allows subscribers unlimited simultaneous connections so they can connect all of their devices to one account.

The Mac is largely regarded as a secure system. And it is. Apple has employed a lot of effort to ensure that it comes with a lot of privacy and security features. But that does not mean that the Mac is invincible. To add an extra layer of armor, you should get a VPN for your Mac.

A quality VPN does not just guarantee your privacy and security. It also helps you bypass Government censorship and restrictions. It enables you to unblock streaming platforms locked to regional locations, such as Netflix or BBC iPlayer. In addition, you can torrent and game online safely.

The top VPN I recommend for the Mac is NordVPN. It comes with an impressive number of servers and does not compromise your privacy while offering speed and reliability.