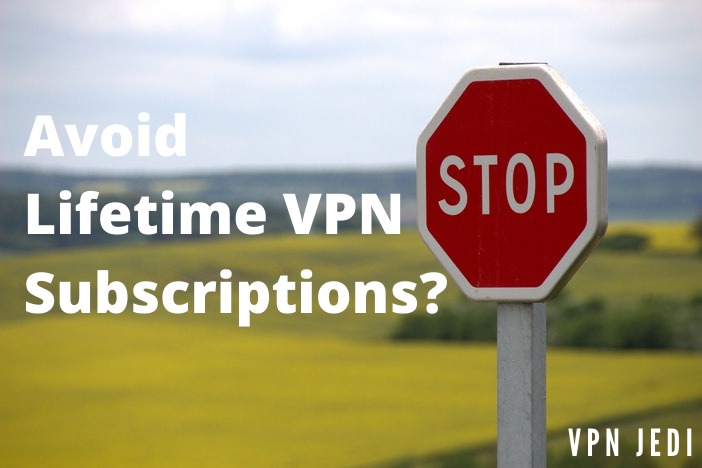 Recently, VPN providers have begun to offer lifetime subscriptions to their users. That is in addition to the regular subscription models which have monthly or annual subscriptions or as their single package.

Now on the face of it, this may seem like a great deal. After all, you would simply be required to pay once for the service and then never have to bother about it anymore. Granted, this fee would be higher than a standard subscription. Still, it does look to be worth it.

There are a few factors for you to consider before hopping on one of those. One of which is what the term ‘lifetime’ even means in this context. Which lifetime is being referred to here? The users’ lifetimes? That of the provider’s? Or is it actually a fixed term which you would have to dig deep into the policy to uncover?

It is a pertinent question and one which potential buyers of this freebie offer must first look to answer.

Lifelong VPN subscriptions have a certain allure, and that is fairly understandable. Free VPNs get a bad rep these days. And for good reason too. They are very limited when compared to premium VPNs in terms of features. But they are more notorious for mining user data and selling to the highest bidders.

With that being the case, you can see why users on a budget may decide to move on to what they consider the next best alternative – lifetime VPNs. These apparently offer premium features, after all. And at very cheap prices too. But are they worth it?

In this article, I will break down for you certain hidden truths behind unlimited or lifetime plans. We are going to explore the reasons why buying one for a VPN service may not be such a great idea.

Table of Contents show
Why You Should Avoid Lifetime VPN Subscriptions
What’s the Alternative?
Summary

Why You Should Avoid Lifetime VPN Subscriptions

What Lifetime Does the Plan Last for?

If you decide to take a leap of faith and jump on a VPN lifetime subscription service, it would probably be as a result of an expectation that at least you would get to enjoy that service for as long as you are alive. You would most likely be wrong.

Consider the case of DissembleVPN, a VPN provider that suddenly appeared on the scene, offering a stupendously cheap lifetime subscription offer of $13. Of course, they had a ton of people hop on in a heartbeat. Their subscribers were glad they had internet privacy and security covered for the rest of their lives.

What followed was not surprising. Soon after, DissembleVPN was down and out, without any reasonable explanations offered. What’s more, none of those subscribers got a refund of their fee.

They May Prove Not to Be Good Value for Your Money

On the face of it, a fixed lifetime or unlimited package on a VPN service is generally more expensive than other plans that have you subscribing regularly. But when extrapolated to cover an arbitrary number or range of years which could be termed a lifetime, it does in fact look to be a good value for your money.

But is it really? The top VPN providers do not offer their users a lifetime subscription. And that is because it really does not make much economic sense to them. Operating a quality VPN service cannot be an easy endeavor for these providers.

They have to run a network of servers spread out across the world, upgrade protocols and software, and pay security costs. You must also factor in costs of maintenance, marketing, app development, and a host of others. There is huge money involved.

Some VPN providers have actually stated that they are not interested in offering lifetime subscriptions and never will. So why do a few other VPNs do, you may wonder. And you may be drawn into thinking that if the VPNs want to shoulder these costs to give you a sweet deal, why should you reject it?

Well, the answer to that lies in the second point.

For service-based businesses like those of VPN providers, customer retention is key. That’s why a lot of these businesses have an around-the-clock retinue of well-trained customer service staff.

They make sure they can deal with issues relating to their service from users and have them leaving satisfied. It is the same reason users who plan on opting out are lured to remain with sweet offers.

Threats to leave may not result in the type of response expected, as you would simply be one less user to worry about. Especially considering that you will not get your money back.

In addition to this, providers offering lifetime subscriptions simply cannot afford to increase the size of their network of servers or to add and upgrade features that would improve their service.

Say China upgrades the Great Firewall to block VPNs more efficiently, for example. A VPN provider who only sells lifetime subscriptions will have no incentive to invest money into upgrading their systems to evade the Firewall as it may prove too expensive for them.

The best alternative to lifetime VPN subscriptions is high-quality, but affordable VPN services. If you look out for them, you will find that there are several alternatives to these fake unlimited deals that will not tear a hole in your pocket.

You don’t even have to look far. Here, you will see a list of the cheapest VPN providers that provide top-of-the-line services.

Another alternative is actually hopping on a free VPN. I know what you’re thinking – there has got to be no way I’m recommending free VPN services for you after laying out a bunch of reasons you should steer clear of VPNs that do not charge subscriptions.

Well, you have a point there. I’ll admit that I’m not a fan of free VPNs. But at the very least, they will not cost you a dime, and so you are already ahead of VPN services that offer lifetime deals. Free VPN providers sell ads that generate money for them. Some may offer premium plans which they will try to lure you on.

Lifetime VPN subscriptions appear to be bargains at face value. In reality, they are usually anything but. They are usually unclear as to how long they actually last and generally do not offer the most quality service.

In addition, they struggle to afford to keep up with the pace of constantly evolving technology. As a result, users are usually left exposed to potential security and privacy breaches.

The best alternative to lifetime VPN subscriptions is affordable but premium-quality VPN services. For this, I recommend Surfshark. It comes with the best security and privacy features to keep you fully anonymous on the internet. And for a very pocket-friendly price too.