Skip to content
Home » What is Kodi and is it Legal? Everything You Deserve To Know 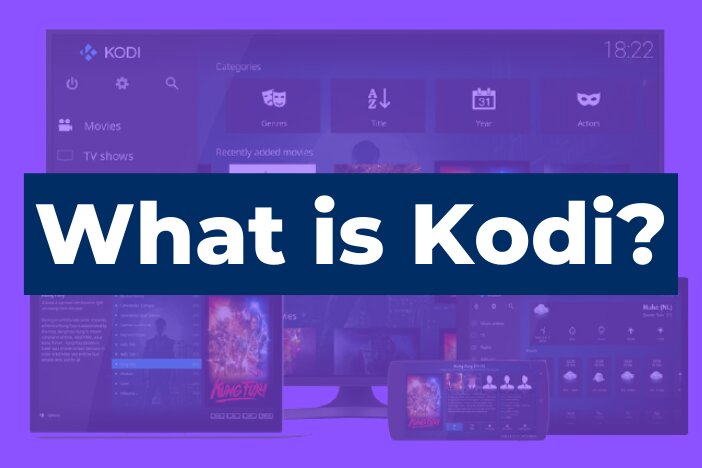 So, what exactly is Kodi?

This may be the question that you may be asking and currently looking for detailed information on.

If you are thinking of not paying for some streaming services like Android TV, Amazon Fire TV, or cable TV, and still be able to watch your favorite channels like Hallmark, NBC, and FOX News.

Or you are probably looking to build up your own home theatre and watch TV shows, movies, listen to music and catch up on all your favorite sports team in just one place.

Then the Kodi app is just what you need as it lets you do all of that with ease.

Table of Contents show
What is Kodi?
Is Kodi Legal?
Do I Need a VPN to Use Kodi?
Best VPN for Kodi
Can Kodi Replace Cable?
What Does Kodi Do?
What Devices Does Kodi Support?
Which Remote Controls Can Work With Kodi?
How do I use it?
Why should I use Kodi?
Conclusion

Kodi, previously recognized as XBMC, is a free and open-source (GPL) software media player and entertainment system that runs on Windows, Linux, Android, OSX, and iOS and has a 10-foot user interface that can be used with television sets and remote controls.

It enables users to listen to and watch most podcasts, videos, music, and other digital media files stored on local and network storage media, as well as on the internet.

Kodi’s forums and Wiki are brimming with information and support for anyone from new users to application developers.

The non-Microsoft group around what is now known as Kodi has developed its very own audience and developer community.

Kodi is run by the non-profit XBMC Foundation, unlike other streaming tech companies such as Android TV or Plex.

Thousands of coders and engineers all over the world are actively upgrading and developing the app, installing add-ons or builds to customize Kodi is now possible, and they are free.

Kodi heavily depends on your current media, so you’ll always have to pay for video streaming services like Hulu and Netflix, as well as music streaming apps like Pandora and Spotify.

We provide a detailed description of the common media organizer, including its legality, in the sections below.

It is perfectly legal to download and use Kodi for the purpose of managing and playing media files that you own.

Kodi is just a piece of software licensed under the GNU General Public License, and it’s as legal as any other.

That being said, just like a torrent application can be used to share files lawfully or to distribute illegally uploaded content, Kodi can be used for less ethical purposes.

The XBMC Foundation, on the other hand, is surprisingly open about what Kodi is.

The developers cooperate with the Software Freedom Law Center, which advices on topics such as copyright and trademark, and the source code for all supported platforms is available on GitHub.

Nevertheless, since Kodi is open-source, a few of the supported plug-ins and add-ons could be exploited to access less trusted content.

Generally, you are responsible for how you use Kodi, but it is perfectly legal to have a construct of the media center on any computer you own.

A further aspect of legality to remember is Kodi boxes.

Kodi boxes are legal as long as users use official or third-party add-ons.

To prevent the stress of installing Kodi on a device, you may buy a Kodi box.

Besides that, if these boxes are set up to work with third-party add-ons that have access to illicit streams and content, they are breaking the law.

Kodi is legal, as shown by the fact that it is available in both the Google Play Store and the Microsoft Store.

That, believe me, is a difficult yardstick test to pass.

However, if you use Kodi addons to stream free content, you can run into copyright issues.

Your government, ISP, and even third-party organizations can track everything you do across the internet.

We do not condone copyright infringement in any way, but we are firm supporters of your right to privacy.

However, if you use Kodi to install third-party add-ons, we recommend using a VPN in addition to the software.

Do I Need a VPN to Use Kodi?

Whether or not you intend to use a virtual private network (VPN) with Kodi is dependent on how you want to use it.

A VPN isn’t needed if you’re only using Kodi to control your local media libraries.

However, if you start using add-ons that use your network service, a VPN can help protect your information from being spied on by your ISP (or someone else).

However, a VPN cannot shield you from all security threats.

A VPN, for example, would not prevent you from installing malware disguised as a genuine third-party add-on or from supplying your information to phishing websites posing as genuine login pages.

Since several Kodi add-ons are third-party, the latter is a serious concern.

As there are no VPN applications in Kodi’s official repository of add-ons, your best choice is to use a VPN on the computer where Kodi is activated.

All of your outgoing internet traffic will be covered if you install a VPN on your phone.

For a long time, here at VPNJedi, ExpressVPN has been our go-to VPN service.

It’s simple and straightforward to use, and it works across a variety of platforms and devices.

In our experience, the speeds have indeed been great, but your mileage can differ.

Besides that, it is one of the more costly VPNs available.

NordVPN is another great alternative that is much more accessible.

NordVPN has a much larger number of servers than ExpressVPN and a lot more security features.

The long-term plans also make it one of the most affordable VPNs available.

We prefer ExpressVPN because it offers us faster speeds, as VPN usage slows down browsing speed, but NordVPN comes in a near second.

Another common option is Cyberghost.

It simplifies things by categorizing everything into modes and categories.

It benefits from a large number of servers, excellent security features such as malware blocking, and a low price.

They often make it easy to use by offering a one-click setup that connects users to the nearest or fastest server available.

Both of these characteristics contribute to the highest degree of defense and stability.

Dedicated servers are available via the VPN for Netflix, Hulu, BBC iPlayer, and other popular streaming services.

These and other common services can be used without any problems or affecting the speed or ease of use.

Many people wonder if Kodi is a good way to “cut the cord” to get rid of cable.

In a nutshell, the answer is yes.

It is, however, difficult to set up and not particularly user-friendly.

Kodi has all of the functionalities you’d really need to substitute your cable box, including the ability to stream and record live TV and store content you’ve downloaded and enjoyed.

You can get the same benefits as live TV by using a Personal Video Recorder (PVR) backend to set up live TV features on Kodi.

You can even watch and record live TV using Kodi’s user-friendly interface.

It supports a variety of backends, including NextPVR, MythTV, Tvheadend, MediaPortal, and many others.

Kodi’s worth is determined by how you intend to use it, just like any other probable connector app.

What Does Kodi Do?

It’s possibly easy to explain what Kodi can’t do than what it can, which is that it wouldn’t provide you with any content.

This implies that you’ll have to include all media, including music, shows, movies, and so on.

Users actually often install Kodi on their devices in order to watch their preferred content.

Let’s say you want to stream video from a website, but your streaming device doesn’t provide assistance or isn’t compatible with that website.

The option left to you is to install Kodi on your Fire tv, add the website, and stream using the Kodi app.

Add-ons are digital resources that can be linked to Kodi in addition to websites.

Although Kodi does not have its own content, it does allow you to stream all of your media from one location on almost any device.

What Devices Does Kodi Support?

Since Kodi is available for Android, Windows, macOS, iOS, Linux, and even Raspberry Pi (RPi) users, you’re likely to own at least one device that supports it.

Installing Kodi on some platforms, such as macOS and Windows, is as simple as downloading the installer package.

Since the Kodi app does not exist in the App Store, the process is somewhat more difficult for iOS users.

If you use Cydia Impactor, iPhone users must first ensure that their phone is jailbroken before installing Kodi.

Keep in mind, though, the legal aspects of using such apps on an Apple computer.

Using compatible add-ons or a local network, you can sync your media libraries through multiple devices with Kodi.

There’s nothing stopping you from setting up a dedicated media player in each of your rooms with your Kodi library.

Since Kodi is open-source software built by the non-profit XBMC Foundation, the group is responsible for many of its features and add-ons.

In reality, this implies that Kodi is updated on a regular basis.

Which Remote Controls Can Work With Kodi?

Kodi includes support for “dozens of remotes,” and the service was built with a “10-foot interface,” according to the XBMC Foundation, making it a perfect living room solution.

To put it another way, there’s a fair chance your old remote will function with the service.

Kodi gives you full control over your media.

Begin by installing an installer in the desired format.

Installation is fast, and the program typically provides a one-time mini-tutorial whenever you do something new, making it simple to learn the basics.

Install some more of the add-ons available to get the most out of Kodi.

You can do this in one of two ways: you can either download individual mods from their developers or from a repository like SuperRepo.

Why should I use Kodi?

Kodi’s key draws are its independence and versatility.

It suggests you’ll never be disconnected from your content when on the go if you have an internet connection, and it enables you to grab media from various locations and libraries and play it on one central hub.

Kodi also gives you far more control over your media files than any other player applications, with far more video and audio options.

Also, subtitles can be given a professional touch, with controls that allow you to change the offset speed so that text and speech are perfectly aligned.

This article has tried its best to explain what is Kodi.

The appeal of Kodi, on the other hand, is entirely dependent on how you want to use it.

Kodi is a winner if you’re seeking a way to view and download content such as television shows, videos, songs, and images to all of your home’s devices.

However, if you’re looking for a separate streaming service that allows you to access content with minimal effort, Kodi isn’t for you.