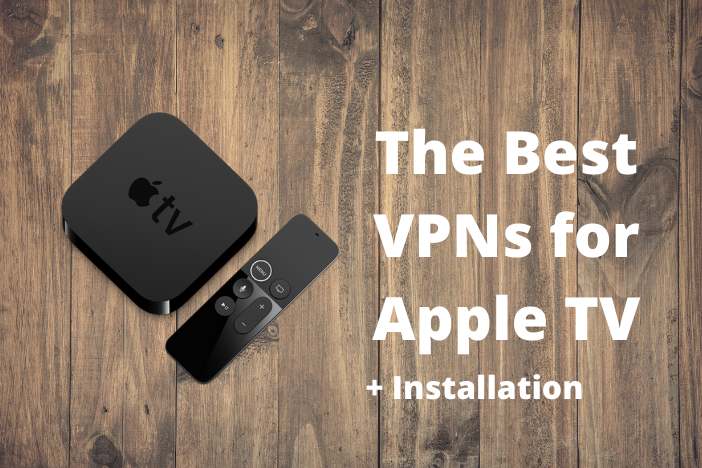 The Apple TV is a great device that connects to your TV and brings you the best internet TV over a wireless network. It lets you stream videos and music, play games, and use Apple apps.

Unfortunately, some of the services you may want to access on your Apple TV are limited by censorship and geo-blocks. For example, Netflix has different libraries for different countries. You will not be able to stream videos only available on Netflix UK if you live in the US. That is unless you use a VPN.

Plugging your Apple TV on a VPN will ensure that the internet traffic will not be detected by the platforms you intend to access. You can bypass the geo-blocks by connecting to a server-based in the country of the blocked content, tricking the streaming platforms into thinking you are based there.

How to Set Up a VPN on Your Apple TV

Apple TV does not support VPNs, so it is not just as straightforward as installing one on your computer or mobile phone. There are different ways you can solve this problem. You may decide to configure a Wi-Fi router, buy a pre-configured router, or a third process which I’m going to guide you through shortly.

Because Apple TV has no native support for VPNs and you cannot just write in the VPN server address, some VPNs have created a facility called Smart DNS, which allows you to change your DNS settings and unlock geo-blocked content.

Follow the guide below to install your VPN on your Apple TV:

The 5 Best VPNs for Apple TV

A very popular VPN provider, NordVPN ranks near the top on most VPN lists. It comes with a huge network of high-speed and reliable servers, together with the ability to unblock most streaming services.

NordVPN also offers consumer DD-WRT routers that come pre-configured with the VPN. That way, you don’t have to go through the cumbersome process of installing it on your own router. Of course, you could simply go the SmartDNS route if you are not worried about encrypting your traffic.

With over 5,500 lightning-fast servers across more than 60 countries, you can stream content at the steadiest speeds, with no lags or buffering. NordVPN can unblock access to Netflix, Hulu, Amazon Prime Video, HBO, BBC iPlayer, and many more. You get unlimited bandwidth and zero speed throttling.

If you are interested in testing NordVPN risk-free, you can take advantage of its 30-day money-back guarantee.

Remember the process I mentioned involving routers to connect your Apple TV to a VPN? Well, ExpressVPN stands out among a lot of other VPNs because it sells pre-flashed routers. Purchasing this router will help you stay connected to the VPN without any additional settings.

Although this feature will allow you to unblock content, it does not offer the full coverage of privacy that installing on a router or a pre-flashed router will give you.

With ExpressVPN, you can unblock a host of streaming platforms, including Netflix, Hulu, Amazon Prime Video, HBO, BBC iPlayer, and Showtime. It offers a wide server network, containing 3000+ servers in 160 locations across 94 countries.

In terms of speed, ExpressVPN again stands out. It is simply second to none, ensuring that you don’t have to worry about lags, even streaming in 4K.

You get a 30-day money back guarantee back up too, to try it out.

CyberGhost is another great option for the Apple TV, providing reliable connections and allowing you to unblock content while streaming at blazing fast speeds.

It provides access to a very extensive network of 6,600+ servers located in 88 countries. You get blazing fast speeds and unlimited bandwidth on CyberGhost’s servers for unbuffered streaming.

It has dedicated streaming profiles for an enjoyable streaming experience. There are streaming-optimized servers that very efficiently bypass geo-blocks on services like Netflix, Hulu, Amazon Prime Player, BBC iPlayer, Disney+, and a host of others.

CyberGhost also offers pre-configured routers for your Apple TV. It has a partnership with Flashrouters to provide Wi-Fi routers that come with the app pre-installed. This is handy for those who would rather not have to install one on their routers themselves.

If you decide to try out CyberGhost for your Apple TV, you will be doing so risk-free for 30 days. There’s an option of a refund available if it is not for you.

What makes Surfshark stand out is that it allows you unlimited simultaneous connections on all of your devices. Basically, you can stream on your Apple TV(s), computers, mobile devices, Android TV, Chromecast, etc. Well, as much as your network can carry anyway. Most other top VPNs limit you to 7 at most, so this is great value for your subscription.

Surfshark comes pre-installed on a router, so you can buy one for your Apple TV. You could also install it manually on your router if it is compatible. It offers the Smart DNS service too as part of its standard subscription.

If you decide to use the Smart DNS tool, you will be required to verify your IP address on Surfshark’s website using the same Wi-Fi connection as your Apple TV.

It offers more than 3,200 servers in around 60 countries. The wide network is great for unblocking popular streaming sites like Netflix, Disney+, Amazon Prime Video, Hotstar, Hulu, BBC iPlayer, and others.

Like most other top VPN services, Surfshark offers a 30-day money-back guarantee.

VyperVPN slots in last on this list, with a modest number of servers – 700+ in more than 60 countries. It makes up for that a dynamic server feature that switches automatically in the same location. This helps prevent overloaded and unavailable servers.

Its servers are high speed and capable of unblocking access to some of the popular streaming platforms. These include Netflix, Amazon Prime Video, BBC UK, Hulu, and Disney+. Its proprietary Chameleon technology makes it possible for you to bypass even the Great Firewall of China.

You can buy a router pre-flashed with VyprVPN. Alternatively, the provider offers its own app for routers that run the Tomato firmware. This app makes it very easy to set up configuration on your router. If you only have a DD-WRT router, you can get instructions for installation on the VyprVPN website.

There is a 30-day money-back guarantee available for you to test this VPN on your Apple TV, risk-free.

Can I use free VPNs for my Apple TV?

Well, you certainly could if the free VPN can be installed on your Apple TV, but I would not advise it. While free VPNs offer the allure of not having to pay for them, you may find that they are very limited in terms of features and functionality.

For example, most free VPNs offer limited bandwidth. As you can imagine, it can seriously hamstring a streaming session having your bandwidth throttled. They also generally have snail-slow speeds, so you can expect a lot of lagging and buffering.

But even worse, free VPNs are sometimes dangerous for your privacy. They are notorious for mining users’ data and selling it to the highest bidders for profit. They are a business and have to make money somehow, after all.

Is it illegal to use a VPN with my Apple TV?

No, using VPNs with the Apple TV is not an illegal activity. Streaming providers set geo-block restrictions and employ anti-VPN technology to discourage users from bypassing them. But you will not be breaking any laws by using a VPN with your Apple TV.

The Apple TV is a handy device that can handle most of your entertainment needs. You can stream videos, music, and play games on the device.

Alas, users are limited by geographical restrictions that are used by streaming platforms. To bypass these restrictions, you must use a VPN. All of the VPNs I have recommended above will do a great job with your Apple TV device.