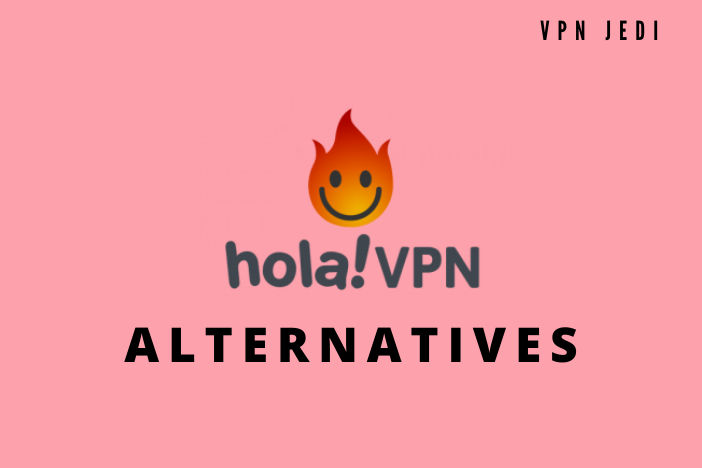 I’m going to be perfectly honest with you from the get-go: free VPN providers are almost never the solution. In fact, a lot of the time, they are an actual problem.

If you absolutely have to make use of a free VPN though, then Hola is probably not the option you should be going for. And that, boys and girls, is why I have created a list of 5 alternatives to Hola that I would recommend for you.

Table of Contents show
But What’s The Issue With Hola, You Ask?
The 5 Best Alternatives to Hola
Should You Use a Free VPN?
Summary

But What’s The Issue With Hola, You Ask?

Well, the simple answer is that it is not safe, and simply cannot be trusted. It may be free, unrestricted, and will not push ads which may all sound enticing enough to give it a go, but take a pause for a minute and reconsider.

The main issue with Hola is its peer-to-peer system, which basically means that you are required to share your bandwidth with other users of the VPN. You know that will definitely slow down your connection but what till you see what the real monster is.

Because you are also sharing your IP with a bunch of other people, you will have zero control over the activities which are carried out on that IP, which leaves you exposed to the chances of any illegal activities carried out by another user being potentially traced back to your IP address.

In 2015, Hola issued a statement in which they firmly reiterated their commitment to operating a VPN that users can trust. According to them, they have since fixed any issues that the peer-to-peer protocols may have caused.

Many VPN users are not still not convinced. Hola VPN is a popular VPN today, with millions of users. But for many others, they will never be an option.

In addition to that, MyEtherWallet (MEW), a cryptocurrency wallet service, asserted a few years ago that Hola puts its users at risk. According to MEW, users who accessed their service with Hola VPN were at risk of malicious attacks from hackers. Hola has been hacked, and not even once.

The 5 Best Alternatives to Hola

If you have decided that Hola is not the VPN for you, then you may be seeking alternatives. Now, I would recommend that you opt for a top premium VPN instead.

But if for whatever reason you cannot, then browse through this list for what I consider the best free VPN alternatives to Hola. These VPN providers have been tested, and they are much safer options.

My top pick for a free VPN service is Windscribe. It was only launched in 2016, and so it is a relative newcomer to the industry. In spite of that is very highly regarded.

Windscribe has reasonably good speeds and you will find it generally stable and reliable.

As expected with a free service, there is no unlimited bandwidth or data transfer. However, users are allowed 10GB a month which is actually quite generous.

Free Windscribe users are not allowed to hop on all the servers that premium subscribers get access to, which you will probably find frustrating. On the plus side, the servers which are actually available have decent connection speeds.

If you decide to pay for the service, you will be offered 179 servers across 63 countries at a budget-friendly price.

Another great alternative to Hola is Hide.me, which has 28 servers in over 20 countries, with very decent connection speeds.

Hide.me users are allowed up to 2GB of data transfer every month. It is not much, but will largely be enough if you plan to use it to access blocked websites or protect your privacy over public Wi-Fi.

With hide.me, your security is paramount. It uses the AES 256-bit encryption to hide your internet activities, with OpenVPN data encryption protocol.

If you decide to get on the premium version, you will get unlimited data transfer and simultaneous connections on up to 10 devices, along with a 30-day money-back guarantee.

You’ll find that TunnelBear is probably the most user-friendly free VPN available with its clients for Windows, macOS, and mobile phones simple, easy to set up and use, and intuitive. It has a charming user-interface, that contributes to a pleasant experience.

TunnelBear has a wide network of servers spread out across the world. With that, you can be sure that the routing of your data will be seamless.

With TunnelBear, you can be certain that your data traffic logs will not be stored. It enforces a strict no-logs policy. You get advanced 256-bit encryption to keep your connections secure. Also, you don’t get popup ads like you would on Hola.

One drawback is that you are only limited to 500 MB of data per month. Also, TunnelBear cannot unblock Netflix, so you should look elsewhere if bypassing geo-block restrictions and streaming on that platform is something you are after.

The paid version of TunnelBear offers users access to servers in 23 countries and unlimited data transfer.

Hotspot Shield is an immensely popular free VPN provider. You can upgrade to premium for unlimited bandwidth, but on the free version, you get a data cap of 500MB a day, which adds up to about 15MB a month.

In total, this is 50% more than Windscribe’s offering but can become frustrating if you need to use more than 500MB in a single day. Still, it is more than you can get on most other free VPNs out there.

To make it easier, Hotspot Shield compresses data while you stream. As a result, you can squeeze out more of the limited bandwidth.

Hotspot Shield has servers in more than 80+ countries, but you can only take full advantage if you are a paying subscriber. Free users are only allowed one server, which is located in the US.

If you decided to upgrade, you would be able to unblock access to geo-locked content on platforms like Netflix, Hulu, Amazon Prime Video, and BBC iPlayer.

In terms of security, you get the AES 256-bit encryption which keeps your data safe from prying eyes. Hotspot Shield has a strict no-logs policy, and so it does not collect user activity data.

There is a 7-day free trial so you can try out the premium features. Hotspot Shield has a generous 45-day money-back guarantee if you decide to upgrade to the Elite version.

Trust.Zone is a VPN service based in Seychelles. It offers users access to a wide network of servers in over 100 different countries.

When it comes to security, users are offered an advanced AES 256-bit encryption, a strict no-log policy and a kill switch. It is a popular service with its users, as reviews would show. It only requires an email address to sign up for the free version.

The biggest disadvantage of this service is that it can only be used for free for 3 days. After that is up, you will be required to upgrade to the premium version.

Premium users on Trust.Zone are allowed up to 5 simultaneous connections and access to servers in over 44 countries.

Should You Use a Free VPN?

With a free VPN service, you don’t need to dish out extra money to pay just so you can access the internet, stream or play your online games.

Therefore, I can totally see why a free VPN may seem like a great idea. Especially if you don’t mind ads and you consider a lot of the features on paid VPNs as gimmicky.

Whatever the case may be, it is important that your decision is made from a position of information. You must understand that even free VPN services need to make money some way and some may go about this by selling ads while others could do so in addition to more nefarious means, like stealing and selling your data.

In addition to that, you will that that free VPNs can be frustratingly slow, your bandwidth may be limited and you may not be granted access to servers in regions that you would want.

Paid VPN providers usually offer free trials to their new users and also offer money-back guarantees. You may decide to make use of these offers instead of putting your privacy at risk.

If you prefer to use free VPN services, then you should be especially careful in making a decision on which to use. Free VPNs are not the safest bet, and usually come with several issues.

Hola VPN is one of those, and its privacy and security issues have been well highlighted in the past. With that being the case, you may be on the lookout for Hola VPN alternatives that will guarantee you safety and anonymity on the internet.

The free VPNs I have recommend will do just that. My top pick is Windscribe.