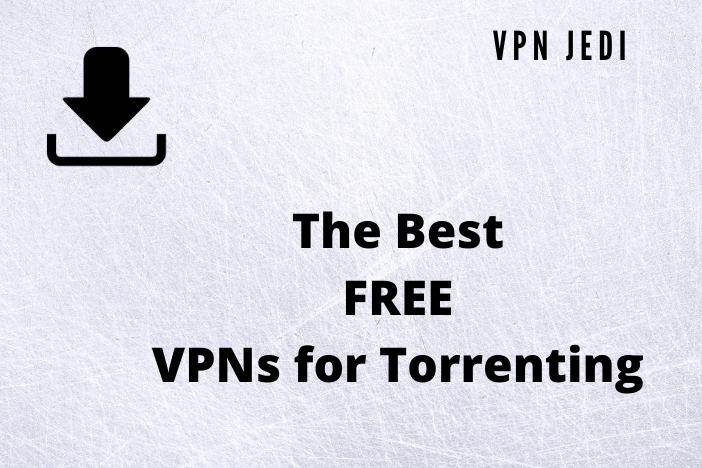 If you torrent frequently, then you probably know how important it is to make use of a VPN for your downloads and sharing.

Torrenting is risky business, and torrent sites are hotbeds for all sorts of nasties. Getting on these sites without the protection a VPN provides, will leave you, your data, and your device exposed to a variety of threats. These threats include malware, hackers, data thieves, and copyright trolls.

When you use a VPN, these threats are eliminated. A safe and private tunnel is created through which all your traffic is routed. As a result, you are basically rendered anonymous and your data can no longer be tracked or stolen.

It may be tempting to choose a free VPN to handle these bad actors instead of having to pay a subscription for one. However, free VPN services are rarely the solution. In fact, they may present their own problems.

For one, free VPNs are usually very limited when compared to premium providers. They come with features that may not be ideal for seamless torrenting experiences. This includes data caps, speed throttling, and annoying ads. They may also not allow torrenting on their servers.

But even more sinisterly, free VPNs may track your online activities and may actually compromise your security with malware.

Generally, finding a free VPN that allows torrenting and is safe and private enough is an uphill task. But I have got you covered. These 6 VPNs are services I have found that will allow you to download and share torrents securely and privately.

Kicking off this list is Windscribe. Windscribe comes with free and premium plans and allows free users a data limit of up to 10GB a month. In free VPN terms, that is a lot of data.

While Windscribe does not insist you provide an email before using its services, signing up without one restricts you to just 2GB a month. Tweeting about the service will net you an additional 5GB in bandwidth.

Windscribe offers a network of nearly 200 servers based in 100+ locations across 63 countries. Not all of these servers are accessible by free users, though. You get 10 servers based in countries like the US, the UK, Canada, France, and Germany.

Windscribe’s servers are fast and stable and some are optimized for P2P activity. It is compatible with torrent clients like BitTorrent, Vuze, uTorrent, and Deluge.

In terms of security, your data is encrypted with 256-bit AES encryption, the industry standard. It keeps no user logs, so you don’t have to worry about leaving behind any data trails.

You also get DNS leak protection, an automatic kill switch, and an ad blocker. The Always-On Firewall feature forces your torrent traffic through the VPN’s safe tunnel.

You can torrent with Windscribe on your Windows, macOS, Android, Linux and iOS devices.

Hide.me is a VPN service based in Malaysia. It offers free users up to 2GB of data a month, which may not be optimal if you are a torrenter into downloading data-heavy files like movies and games. On the flip side, connection speeds are not bad and there are no speed limitations or throttling.

It has a network of 1800+ worldwide servers based in more than 72 different locations. Free users are limited to only 5 of these servers based in the US, Canada, the Netherlands, and Singapore. Luckily you can enjoy torrenting on all of hide.me’s servers, except those located in the US and Australia. It is compatible with major torrent clients.

Hide.me comes with the AES 256-bit encryption so that your data is scrambled and rendered intelligible to any snoopers. You also get a strict no-logs policy and IP leak protection.

There is also a split tunneling feature, which allows you to route your torrenting traffic through the VPN’s tunnel and the rest runs through your local ISP. This significantly speeds up your downloads and P2P activity. Hide.me also offers full IPv6 support.

You can use this VPN for your torrenting on all of the major desktop and mobile platforms.

Tunnelbear’s user interface is the first thing you notice about this VPN. it stands out from most of the rest with its charming, bear-themed design. It is just as friendly to use as it is easy on the eyes. The app does not take a lot to get used to, and it is very intuitive.

It only allows free users up to 500MB of data a month. Fortunately, you can earn an extra 1GB of data for yourself by making posts about the provider on Twitter. Even with an allowance of 1.5GB a month, you still don’t have enough data for any heavy downloads.

For torrenting, you should make use of its servers based in the US, the UK, Canada, Sweden, the Netherlands, and Germany. These servers are torrent-friendly and you will be able to get decent download speeds.

Tunnelbear may be based in Canada which is a 5-Eyes territory but it does not store any user logs. This claim has been verified by annual independent audits. It scrambles users’ data with the AES 256-bit encryption and comes with OpenVPN, IKEv2, and IPSec protocols. In addition, there is a kill switch and a split tunneling feature.

It works with Windows, macOS, Android and iOS devices.

I know what you’re thinking, but you don’t need your credit card to use Surfshark. Surfshark offers a 7-day trial, which lets you test out all of its great features free of charge. It must be noted that the trial only works on mobile platforms and macOS only. This means that your Windows device is not eligible for this offer.

Hopping on this trial gives you access to all of Surfshark’s 3200+ servers in more than 60 locations. You can torrent on all of the servers, and they are all optimized for P2P activity. That means that you will get high speeds and reliable connections so there are no annoying downtimes as you download and share.

Its privacy and security features are also excellent. To protect your data, you get bank-level 256-bit AES encryption, with full OpenVPN support. There are also IKEv2 and Shadowsocks which work great in restrictive countries. An automatic kill switch means that your data is not let exposed in case of interruptions in the connection.

Surfshark is based in the British Virgin Islands, outside of the 5/9/14 Eyes Alliance jurisdiction, and so you don’t need to worry about your logs handed over to authorities. In fact, Surfshark has a strict no-logs policy, so there are none to hand over in the first place.

Speedify is another great free VPN option for torrenting. It allows free users 2GB of data every month and access to all of Speedify’s 1000+ servers across 32 locations around the world. While it connects you to the fastest server available to you, you can decide to be automatically connected to a server that is torrent-friendly.

A relevant feature here is its channel bonding. Channel bonding combines multiple internet connections available on your device to improve the speed of your connections. This is great for torrenting as you can download and share much faster.

Another handy feature is the failover feature. This feature ensures that when you are connected to a Wi-Fi network but move out of range of it, your downloads will automatically continue on your mobile network. This feature works flawlessly and so doesn’t need to manually switch to a mobile connection.

Speedify uses the AES 256-bit data encryption with its proprietary Speedify protocol. There is a Super Secure Mode on computers, which is a kill switch/DNS leak protection combo. Additionally, Speedify does not store user logs, so you don’t have to worry about your activity tracked to you.

Speedify is available on Windows, macOS, Android and iOS.

Hotspot Shield is one of the oldest and most popular VPN services. On the free version, you are offered 500MB of data a day. This is enough for downloading songs, episodes of your favorite TV shows, or spreading out downloads of large files over days.

Hotspot Shield is located in the United States, a 5 Eyes member. Still, it insists that it stores no identifying logs. Some logs are stored such as email address and username. It makes use of the 256-bit AES military-grade encryption technology to scramble your data.

Hotspot Shield supports the free service with ads, so that is also something to watch out for.

It is compatible with Windows, macOS, Android and iOS.

Like Surfshark, PrivateVPN slides into this list even though it is a premium VPN service because it offers a 7-day free trial. This means that you will be able to take advantage of all the premium features it offers, completely free of charge for a week.

It offers a modest network coverage of 150+ servers, located in around 60 countries. PrivateVPN’s servers are high-speed and reliable, and they all support torrenting and P2P sharing. The speeds that PrivateVPN servers operate on mean that you can download and share without annoying lags and interruptions.

Because it is a premium service, there is nothing to worry about when it comes to data limits and speed throttling. You can download and seed torrent files at unlimited bandwidths.

PrivateVPN secures your data with military-grade AES 256-bit encryption. You get to choose from OpenVPN, L2TP, IPSec, PPTP, and IKEv2 protocols. Your connection is also protected with IPv6 leak protection, DNS leak protection, and an automatic kill switch that works on Windows devices.

While PrivateVPN is headquartered in Sweden, which is a 14-Eyes alliance jurisdiction, it operates a strict no-logs policy. None of your data is saved to its servers, and so your torrenting activities cannot be tracked back to you.

You can use PrivateVPN on Windows, macOS, Android, iOS, browsers and routers.

Are VPNs legal to use?

In most countries in the world, using a VPN is perfectly legal. A few countries though have strict bans or some sort of restriction on VPN in accordance to their internet censorship laws. These countries include China, Russia, Turkey, Iraq and the UAE.

How safe are free VPNs?

I rarely recommend free VPNs to my readers. While you are not required to pay for them, free VPNs are rarely completely free. You run the risk of having your data stored and sold to the highest bidders. In addition, they are limited in terms of features when compared to premium VPNs.

Discovering free VPNs that you can put a measure of trust in for your torrenting needs is not an easy task. But we did that for you.

Torrenting is an internet activity that requires safety precautions to be put in place. If you torrent frequently without the shield that a VPN provides, you are exposing yourself and your device to a lot of bad actors.

I don’t recommend free VPNs a lot, because they usually come with a catch or two. But after carefully researching, I have been able to come up with free VPNs that are great for torrenting.

Check out the website for a lot of other great guides and recommendations.