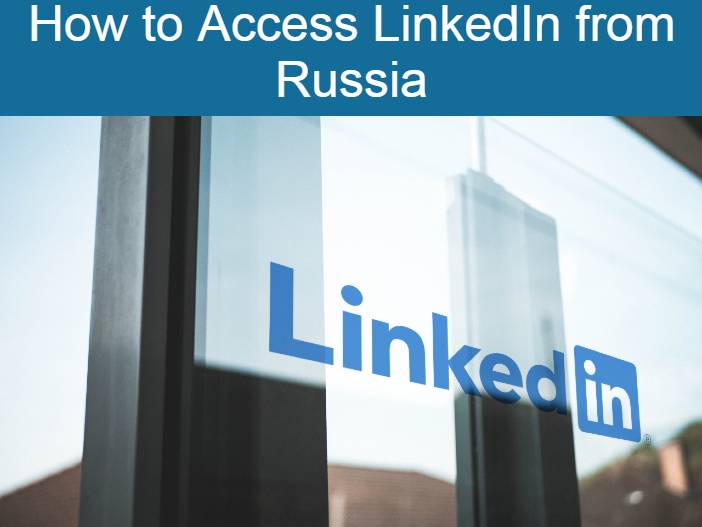 According to him, the Russian Government has over time, “built up an entire arsenal of tools to reign over information, internet users and communication networks.”

It is therefore not much of a surprise to note that several internet websites and services are blocked or somewhat restricted in Russia.

Among these is LinkedIn, a social networking site. This is a consequence of a Russian law that prohibits storing of data of Russian internet users outside of the country, a policy LinkedIn employs.

If you live in Russia or you are there on a visit and you want to access the services available on LinkedIn, all hope is not lost. With a top class VPN service, you can evade the restrictions placed on the website and make use of it. The VPN does this by masking your IP address when you connect to a server located in another country.

Why You Need a VPN to Access LinkedIn in Russia

All user data have to be stored on servers or databases which are based in Russia. This is a Russian law with no compromise. Like many of the other websites and web services which have been banned or restricted in Russia, LinkedIn stores user data on servers based abroad.

LinkedIn has been blocked in Russia since November of 2016 and Russia’s internet regulator insists that it is not returning to Russia any time soon. While Russia insists that storing data within its national borders is done in the name of protecting its internet users, critics argue that Russian authorities are simply trying to create an avenue to access the data itself.

With a premium VPN service, Russian LinkedIn users can breeze past this restriction by the government. Connecting your VPN to a server in another country will grant you access to an IP address in that location. This fools your internet service provider into thinking you are on a connection from outside of Russia. The government’s restrictions are also fooled and you will have access to LinkedIn and other blocked internet services.

Based on this, I have compiled a list of the 5 best VPNs that can be used to access LinkedIn from inside of Russia.

First on my recommended list is NordVPN, and it is for all intents and purposes one of the best VPN providers available on the market. It is the reigning bang-for-buck ratio champion. You are simply not going to get another VPN anywhere else packed with NordVPN’s features, power, speed and reliability as cheaply as it offers.

NordVPN has a wide network of 5,300+ high speed servers in 59 server locations around the world. This makes it very easy for you to access a server based in a country which will let you access LinkedIn.

NordVPN is an encryption powerhouse, with its AES 256-bit military grade encryption which masks your connection when you connect to any of its obfuscated servers. It uses OpenVPN, one of the most secure protocols available but also has IPSec/IKEv2 protocols.

There is a strict no-log policy so you don’t have to worry about your data trails being stored and used to identify you. Also, its automatic kill switch prevents data from leaking outside of its secure VPN tunnel in case of a connection fail.

NordVPN also offers an emergency VPN for people who are concerned about extreme government censorship and the consequences that may come with them. This service is free and NordVPN gauges eligibility for it on a case-by-case basis.

It is compatible with a host of devices and operating systems. You can unblock streaming platforms like Netflix, Shudder, Crunchyroll, Amazon Prime Video, Hulu, and BBC iPlayer. It can be accessed on Windows, macOS, iOS, Linux, Chrome, and Wi-Fi routers

Users are allowed 6 simultaneous connections to their devices on one account. New users are granted a 30-day money back guarantee.

Another great VPN that you can use to access LinkedIn services in Russia is ExpressVPN. It has a network of over 3000 blazing fast servers in over 90 countries. While ExpressVPN’s main selling point is its lightning-fast speed, it has obfuscated servers which will help you slip past Russia’s internet restrictions and VPN blocks.

Obfuscation works by camouflaging your internet traffic to seem like standard traffic on your local ISP. This makes detection of VPN usage so much harder.

ExpressVPN ensures the protection of your privacy by employing advanced AES 256-bit encryption to mask your IP address and data. There is a strict zero-logs policy. Therefore, none of your identifying data is stored on its servers and traced back to you.

ExpressVPN also works with Netflix, ITVHub, Shudder, Disney+, Amazon Prime Video, and BBC iPlayer. You can use it on both desktop and mobile with Windows, macOS, Android, iOS, Linux, browsers, and Wi-Fi routers.

Users are allowed up to 5 connections at the same time on their devices from one account. Additionally, there is a risk-free 30-day money-back guarantee available for new users.

SurfShark is a great alternative for small businesses in Russia with its generous offering of unlimited simultaneous connections on all devices on a single subscription. Data and bandwidth connections are also unlimited.

It has a network of over 1700 servers, spanning 63 countries. Connecting to any of its servers outside of Russia, especially on its obfuscated servers, will grant you access to the LinkedIn website and services. Surfshark operates advanced 256-bit encryption together with OpenVPN protocol to keep your internet activity away from Government eyes and restrictions.

It has a kill switch feature to block data leakage in case of an interruption and a no-logs policy. There is also a MultiHop feature, which pushes your internet connection through multiple servers.

You can try out SurfShark by taking advantage of its 30-day money back policy.

CyberGhost is a very capable and full-featured VPN that has a network of over 7000 servers spanning 90 countries. While it does not have any obfuscated servers, its large connection of servers makes up for that and makes accessing LinkedIn from Russia easy for users.

It is a great choice for VPN newbies with its user-friendly and intuitive interface, together with a one-click connection. You can start up the app, join a secure server, and be connected to LinkedIn in no time at all.

CyberGhost makes use of advanced 256-bit encryption which comes with support for the very reliable and very secure OpenVPN protocol. There is also a strict zero-logs policy and so Russian authorities will be unable to trace your internet logs. Its automatic kill switch shuts down your connection in the case of an interruption so no data can be leaked.

You can use CyberGhost to stream BBC iPlayer, CBS, Netflix, ESPN+, and Amazon Prime Video. It is compatible with Windows, macOS, Android, iOS, various browsers, and routers.

It allows up to 7 simultaneous connections and an industry-leading risk free 45-day money back guarantee for new users.

PrivateVPN is a VPN service with relatively few servers – only 150+ spread across about 60 countries. But it is still a viable option for you if you stay in Russia and want to access LinkedIn services.

It scores major points with its military grade 2048-bit encryption and support for OpenVPN, L2TP and IVEv2 protocols.

You can unblock and access such streaming platforms as Netflix, Hulu, HBO Now, Amazon Prime Video, and BBC iPlayer. PrivateVPN is compatible with Windows, macOS, Android, iOS, Linux, and browsers.

You are allowed up to 6 connections at the same time on one subscription. Additionally, new users are offered a 30-day money-back guarantee, but only as long as they don’t use up to 100GB of data.

What else can a VPN do?

Subscribing to a VPN service gives you freedom to access and use the internet on your own terms. With a VPN, you can overcome geo-block restrictions, access services that would ordinarily be blocked to you such as LinkedIn. You can also unblock streaming libraries on various platforms such as Netflix, Hulu and Amazon Prime Video.

You can safeguard your privacy by donning a cloak of anonymity whenever you use the internet for browsing, downloading, streaming and torrenting and with most premium VPN services, your usage logs are not stored and hence cannot be traced back to you.

Can I connect to LinkedIn on the go with my VPN?

Yes, you can. The VPN providers I have recommended are all compatible with both desktop and mobile and each have apps for mobile operating systems. They are also armed with security features which will protect your privacy and data on public Wi-Fi connections.

While LinkedIn is blocked in Russia and inaccessible via a local ISP connection, a premium VPN service can grant you almost instant access to it, in spite of the restrictions placed by the Government.

You can test out the VPN services I have recommended, and go for the option that will better suit your preferences, all factors considered.